When Real Models received Stan’s registration, it took a minute to collect ourselves after finding out he was a 95 year old wanting to be a mature model. Managed by his daughter, Suzanne who has also appeared in a photoshoot through Real Models, Stan has taken to appearing in front of the camera with natural flair. After appearing in campaigns for Living Care (NSW) and Homestyle Aged Care (VIC), he is now enjoying a relaxing holiday overseas. 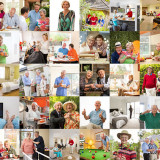